I was giving a class about Islam to my second year students last November and we were discussing Islamic dress. I asked the students if any of them would be interested in participating in World Hijab Day and explained that it involved wearing a headscarf for a day in order to experience what it felt like for Muslim women. Some of the students were interested in participating but we didn’t make any definite plans.

I always try to get people from inside the various religions to come in to speak to my students on the Bachelor of Arts Degree so that they get an ‘insider’ perspective. Religions look differently depending on the position they are viewed from. For example, a Catholic person will have a very different perception and experience of communion compared to someone from outside the religion. I remember particularly one man from a few years ago who told me that he thought eating ‘the body and blood of Jesus’ seemed cannibalistic.

A few weeks after that first mention of World Hijab Day, one of the local Muslim leaders, Sheikh Abdur Raheem McCarthy (an Irish-American convert with family roots in County Cork) came in to speak to the class about Islam. I asked him if there were any local Muslim women who would come in for a chat and he said there were. I figured we could combine the talks with World Hijab Day and so, preparations got underway.

Our poster for the event (designed by Seamus O’Brien)

The event took place on Wednesday February 1st. It was just days after Trump had imposed an immigration ban on migrants from seven Muslim-majority countries so it was timely in that respect. We had a stall in the atrium in the main building of the Cork Road Campus. Local Muslim women brought in an array of scarves in different fabrics and colours and styles and there was bling and sparkling broaches and headbands for accessorising. The Muslim women helped anyone who wanted to try on a hijab with choosing colours and styles and they wrapped and pinned them into place. We had a steady stream of class groups, lecturers, members of the public and individual students arriving all morning. Many of them just wanted to have a look but many tried on the hijab. There was a lot of laughter and photographs and conversations too. At 11 we went into the auditorium for the public talks.

We had three speakers. They spoke about different styles and their personal experiences of wearing the headscarf. All three chose to wear the headscarf. All three are married with children and with careers. Dr. Rachel Woodlock is a Muslim academic and feminist originally from Australia but now living in County Tipperary. I got in touch with her via Twitter. She spoke about the diversity of dress within Islam. Sheikh McCarthy put me in touch with our second speaker, Brigid Aylward, a local nurse in Waterford Regional Hospital who is from Mullinavat in South County Kilkenny. Our third speaker, Bara Alich, was introduced to me by a mutual friend. She spoke about wearing the hijab whilst running a successful photography business. It just so happened that all three were converts. Rachel came to Islam from the Baha’i faith, Bara who was originally from the Czech Republic came to Islam from no religion, and Brigid grew up in as Catholic. 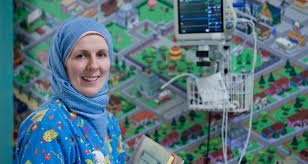 Media interest in the event was phenomenal. Our three speakers were on national and local radio and newspapers and on online media too. Brigid was even interviewed on national TV by Maura and Daithi of the RTE Today show. We were all taken aback by the level of interest. It seemed to me that there was a hunger for people to hear from Muslim women. Almost every piece of media overage was followed by negative comments and name calling, particularly on social media sites.

Since organising the event I’ve had lots of correspondence – private and public – from people voicing their support or criticism of the event. I’ve had newspaper articles forwarded to me outlining the views of Muslim women who themselves oppose the wearing of the hijab and I had one email from a woman who said she would support prostitution as a career rather than the wearing of the headscarf. A friend suggested I ask her which option she would rather for her daughter. Many people said they believed the headscarf symbolised the oppression of women. One Muslim woman told me she was once asked if she wore the headscarf in the shower. Fear and fascination, criticism and support, were there in equal measure.

From the outset this was planned as an event where Muslim and non-Muslim women would have a chance to meet, talk, exchange views, listen to views, try on the hijab. I knew from my own research that Muslim women who wear the headscarf are often stared at or subjected to verbal or physical abuse. And with a rising tide of Islamophobia (fear of Islam or of Muslims) I wanted the event to be one that promoted inclusivity. It wasn’t about promoting or ‘celebrating’ (as one person suggested) the wearing of the headscarf, it was about breaking down barriers and opening doors of communication. Islamophobia thrives on and feeds isolation which in turn can contribute to radicalisation. I support women who choose to wear or not wear the hijab.

The thing is – the headscarf is simply a piece of cloth. A piece of fabric. It, by itself, means nothing. It is how we decide to interpret it that gives it its meaning. We create its meaning depending upon our own perspective. Many people (men and women, Muslim and non-Muslim) view it as a symbol of oppression but for others it’s political. It can be about reclaiming and empowering or recreating an identity, for some it’s religious and connected to devotion, for others it’s about modesty, some wear it for fashion or for warmth, some say it gives them a feeling of freedom, some Muslims believe it is compulsory, others believe it is optional. Its meaning has changed over the centuries and according to place. At various times the wearing of the headscarf has been banned or enforced. It was banned in Turkey and Iran for a time during the twentieth century (by Mustafa Kamal Attaturk and Mohammad Reza Pahlavi respectively).

The Muslim woman who says it is her own choice to wear the hijab is often infantilised and viewed as having internalised oppression without being aware of it. When I was in Pakistan I heard the opposite view from women who  believe women in the West are oppressed and forced by a patriarchal society to wear uncomfortable high heels or low cut tops in order to satisfy the male gaze. The viewpoints change. Some Muslim women ask non-Muslims to not try on the hijab because they view it as a political tool of Islamist groups whilst some Muslim women welcome World Hijab Day and believe it challenges misconceptions of Islam and the role of Muslim women.

Women’s hair seems to be the contested ground. Who decides how to wear hair or what to do with it? Is it oppressive to wear a veil? Is it oppressive to shave armpits, pubic hair, legs? The visibility or invisibility of hair is an issue in cultures across the world. Do we have autonomy or do we simply think we have autonomy? Is it really just about ‘belonging’? The headscarf ultimately is a piece of fabric. It carries different meanings for different people and its meaning is created. No-one (on either side of the debate) can speak for all.

Audrey Hepburn wearing headscarves. Are headscarves worn for fashion purposes anymore or are they (in the West) inextricably bound up with religious symbolism?

Here are links to some of the media coverage for the event: